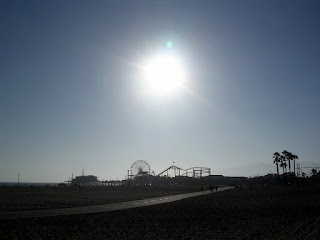 Walking our dogs the other morning we met a friend in the production business. Down by the beach was a large production base camp working on a week-long location shoot, and she had phoned a friend on the shoot to say hi and chat about the scarcity of on-set jobs. She’s been in and out of work a lot lately and was bemoaning the decline in overall movie production, particularly in California. She was hoping California’s just-announced package of benefits to film-makers might help reverse the trend of productions taking the bait of subsidies and tax breaks from other states and countries like Australia and, of course, Canada. Unlike many other US states California has never before offered production subsidies to movie-makers, hoping that just being around Hollywood is cachet enough for producers.

There has certainly been a regular flow of productions hitting the highway including some high-profile ones like the Ugly Betty TV series. However there have also been some glitches such as states running out of subsidy dollars too quickly to make their plans sustainable, on-location resources not matching up to film-makers’ needs and more societal feedback from some places where it’s felt that giving money to highly-paid Hollywood types may not be the most politic thing to do. Some far-flung states have begun to show signs of “film finance fatigue” as it dawns on them that perhaps it isn’t going to be the boon they thought it might, with the economic benefit from inviting movies to town hard to quantify and, more importantly, to justify.

Most producers don’t set out looking for reasons not to film in California: in fact most who end up on location elsewhere for purely fiscal reasons would probably be quite happy filming closer to home. However money always talks and there are usually compelling reasons why productions relocate. Big subsidies do talk big. A major element in movie budgets these days regularly comes from subsidies and tax breaks so there’s no ignoring the obvious.

So, it was refreshing to see the announcement a few weeks back and yesterday’s hurrah from the Governor that already dozens of productions have remained in California that may have skipped town but for his recent package of measures. California has stepped up and the package does help, especially emotionally, but there’s always more than just getting the tax back. Hollywood is here, after all, and it’s got to be good for the business for studios and streets to be busy with moviemaking. We strongly believe that there are always new and innovative ways to finance movies, and getting the most for your money - subsidies and all - is only good sense. The formula morphs endlessly, we're all working on it.

The Out Of Obscurity Team.
Posted by balconybar at 3:37 PM

Very interesting topic, well put, rather timely and important...
It's definitely great to see California has begun the necessary initiative to offer benefits for filmmakers that keep productions local. While this is clearly a step in the right overall direction, the general feeling among independents seems to be that the so-called incentives in California were set up with and only for the benefit of the major studios who have all but monopolized most if not all of the total money allotted for 2010. (If not mistaken the total overall, at least initially, was in the $100M realm for studio pics, with $15M for indies). And the "independent" films that do and have managed to qualify for the California benefits are often likely to have at the very least some degree of connection to an independent studio wing, former head/exec turned "independent" producer or top agencies lurking behind door number three (if not number one).

As you mentioned, a major concern that continues to emerge in question is how long these US states offering incentives will be able to pay back filmmakers once a film has completed production. look no further than what's currently happening in Iowa. For the newly adopted California program, the earliest a filmmaker is eligible to file for the return is 2011 which, for films made for in the $5M and under category often pieced together from various sources and schemes-of-the-moment, that kind of wait time (not to mention the risk that the money might not ever be paid back due to California's current debts and declining economy) seemingly makes any benefit from the California rebates all but impossible for those films that do not follow the traditional Hollywood model. Hopefully, this won't ultimately be the case, but there seems to be a ways to go if California truly aspires to create "incentives" like those in Louisiana and New Mexico, among a few others. Only time will tell...

fyi the Incentives Office hosts its next monthly tax credit event on November 4th at The Landmark. The value of these events often depends on who shows up and whether or not the state reps are willing to delve into the nitty gritty that you won't know til its too late.

I don't think production in LA will ever return to what it once was, but not because there is more production in other states. It's just the fact that medium budget productions are getting rarer and rarer and the low budgets don't hire the crew size that television or bigger budget shows did.

Thanks for your comments, and cheers for reading the blog - pass it on!

You're right that the volume of location production is probably lower and more widely spread these days but I do think that any incentive package is a good thing for California. Sure, the studios are going to be best placed to jump in first, and indies may always have more work to do whether it's on finances or contacts, that's just life. However whether it's studio or indie shoots, jobs will be created, or at the least retained, in California.